skip to main | skip to sidebar

My Aunt Darrelyn tells beautiful stories.  She's my favorite writer & I adore her.  She inspires me to nurture the writer within.  And she makes the best book recommendations.  When she told me about a local event, featuring author Silas House, I jumped at the chance to go.  (You can read her guest posts for Writer's Digest here, including her wise advice to attend book events).

She recommended I start with his first novel, Clay's Quilt.  Simply put, it's a story of the bonds of kin & home, set in the glorious mountains of Kentucky.  I relate to the heartache & struggles of Clay, a young man who lost his mother Anneth when he was four years old.  Anneth's character reminds me of my mom; her beautiful, adventurous spirit taken from her family far too soon.

I love a Southern accent.  The spoken words flow like a friendly song.  I suppose it stems from my love for my Louisiana family.  I hear the voice of my momma when they speak to me.  My boring voice longs to imitate each enunciation.

So I was happy just to hear Silas talk, enjoying his Kentucky accent.  He introduced the story, explaining he writes to find answers to questions within himself.  I had never put it into words myself, but it's the same reason I write.  (It's why I often write about my mom or mother loss & my struggles with Endometriosis).  He read from his latest novel, Eli the Good.  There's nothing like hearing an author read his/her own words.  His reading hooked me; it's going to the top of my everlasting to-read list.

After he spoke & answered a few questions, I anxiously got in line to meet him.  I was compelled to ask if he had lost his mother at a young age, since his story eloquently described the pain of a bereaved child.  He explained his uncle was murdered when Silas was a child, and he drew on those memories for Clay's character.  He thought for a moment, then said his mother had lost her mother when she was nine years old.  He'd always felt sorrow for his mother.  His expression changed as I watched a realization occur to him--his grandmother's death had influenced Clay's character.  He said it hadn't occurred to him until just that moment.  I shared my loss with him & praised his depiction of mother loss.  He signed my book & humbly thanked me for coming out to meet him.

When I got to my car, I carefully turned to the signed page to find these sweet words:
"For Jenny,
I'm glad this book is in good hands.
Yours,
Silas House" 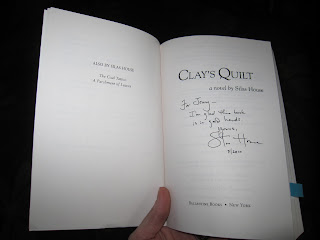 my very own copy
Thanks for sharing this with me Aunt Darrelyn!

Jenn
I am a girl in her thirties who has suffered with Stage IV Endometriosis for over ten years. Join me as I search for healing & understanding. I share my experiences as an Endo Sister--the physical, emotional & spiritual realities of living with this incurable disease. I strive to remain positive & humorous through it all. I pray for a cure for all of us & offer my support & friendship. Won't you be my Endo Friendo?

I am not a doctor nor am I providing medical advice. I am only sharing my experiences & information I think might be useful to others. Since we are all unique individuals, what works for me may not work for you. I encourage you to conduct your own research, follow your intuition & consult medical professionals you can trust.

I Love this Blog Award 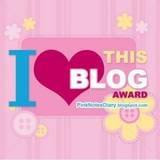